Unlike the BPDU Guard which will disable a port upon receipt of a BPDU, the Spanning Tree Root Guard feature will allow BPDU’s through a port to maintain the spanning tree topology, however if it receives a superior BPDU, which indicates that another switch is trying to become the root bridge it will err-disable the port.

This feature is used to protect your root bridges from misconfiguration or a layer 2 man in the middle attack.

Where do you configure Spanning Tree Root Guard?

The root guard feature is configured on all downstream ports from your core and distribution layer switches.

Consider this simple topology below 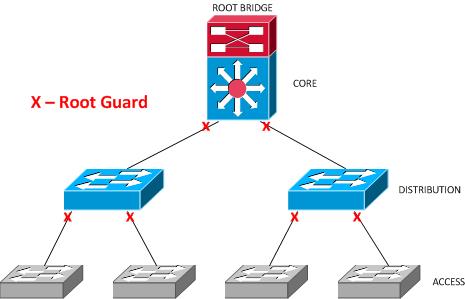 With spanning tree root guard configured on the ports labelled with a red cross this is what is going to happen.
As the BPDU’s come in the switch is going to inspect the bpdu’s and allow them through, however if there is a bpdu received that is superior to the root bridge, i.e advertising a better cost to the root bride then this is going to indicate another switch trying to become root or a potential man in the middle attack.
The port will be put into an err-disable state thus enforcing the position of the root bridge. Hence the name of the feature Root Guard.

You configure spanning tree root guard on a per interface basis

From the Cisco documentation

Hi I'm Roger.
I am CCIE #50038 in Routing & Switching and currently based in the UK working for a Cisco Gold Partner as a Senior Network & Security Consultant. About Roger
Contact Me | Twitter | Linkedin

Previous Post: « CCIE Questions and Answers
Next Post: How much sleep do you need before the CCIE Lab Exam? »

Hi I'm Roger.
I am CCIE #50038 in Routing & Switching and currently based in the UK working for a Cisco Gold Partner as a Senior Network & Security Consultant. About Roger
Contact Me | Twitter | Linkedin