The CCIE salary is no longer what is used to be. Working in IT in the late 90’s the CCIE was the certification to get, based on a gruelling 2 day exam with most students not passing on their first attempt anyone who passed was offered high paying jobs or were snapped up by Cisco.

Sadly today this is no longer the case the certification has dropped in the list of hot certs, being overtaken now by project management, ITIL and Security qualifications.

The graphic below taken from itjobswatch.co.uk Feb 2012 shows that CCIE Salaries are going up slightly with a ccie starting salary being just under £57,000

This information is based on a permanent role. The graphic below taken from itjobswatch.co.uk for Feb 2012 shows typical contract rates 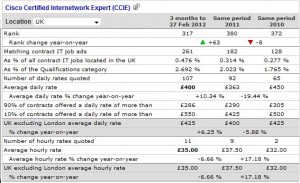 So there you have it, if you wanted to know what CCIE Salary you could expect then the figures above are correct for a role in the UK probably in London.

These figures are %3 down from the CCIE Salary 2011, other certifications are growing in popularity including Project Management and ITIL

It has to be said though that if your motivation for passing the CCIE Certification is purely money then you will not succeed. The greatest reward of getting your digits is the journey and the knowledge learnt.

You will become an expert in your field and with that will come more openings, job offers and more interviews. Which will probably increase your salary.

As to what a ccie starting salary would be this is a very tricky question as it all depends on where you are working, who for and your current level of experience.

What do you think the most valuable certification is in 2012?