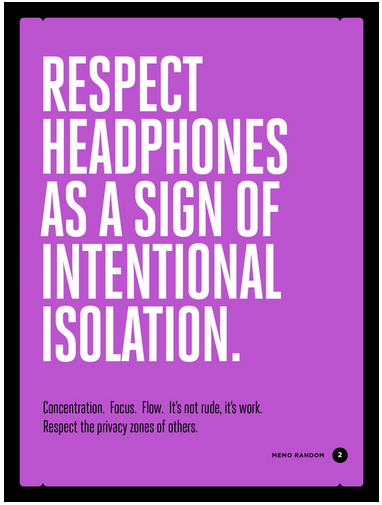 You’ve all been there, you just want to get 30 minutes to focus and get a job done. All you can hear is people talking about football, the meeting they’ve just been to, whose going out with who etc etc.

Open plan offices are great for colaboration but they do have their drawbacks with background noise.

I remember my first job in IT there was three of us who worked from the IT room which was behind a real door which we could shut and lock when we didn’t want to be disturbed. We could escape the office and the only way to contact us was with the phone.

Nowadays in the open plan office if somebody wants to come and speak to you they just come straight up to your desk, normally with a comedy “knock knock!” You have to stop what you are doing have the conversation and then re-focus on what you were doing.

A guy I used to work with had a system that if his tie was over his shoulder do not disturb him. It worked. It was understood in our office if Dave (not real name!) had his tie laid over his shoulder don’t speak to him. After an hour or so he would finish what he was working on and then make a coffee and adjust his tie.

I prefer the headphones solution. I own a pair of Bose QC15 noise cancelling headphones which are awesome. They are the best pair of headphones I have ever owned and they really do cancel the noise. originally designed to be used on a plane they work equally well in a noisy office.

The funny thing is people just think you’re listening to music and still come over and do the “knock knock” on your desk.

When I have my headphones on this is my decision for “Intentional Isolation” I’ts not rude, it’s work
“Respect the privacy zones of others”

This brings me to the amazing work of Designer Jason Franzen he has setup a site www.memorandoms.com with the slogan. Fixing the world one MEMO at a time.

Looking through his memos the headphones one struck a chord with me, but there are many more on there and some which will resonate with you. You can support his project via another great website I came across http://www.kickstarter.com/projects/291480635/memo-randoms

The kickstarter project gives anyone with an idea the chance to launch it on this site and get support via people pledging money. You get the chance to own something that is brand new and just designed and the designer / inventor gets an injection of cash to get his idea off the ground

I might be getting me a set of these! http://www.kickstarter.com/projects/1975231304/engrain-tactile-keys?ref=search